WHERE IS JOHN SHUCK WHEN WE NEED HIM?

So, I write what should be at least a provocative blog and almost no one comments. John leaves town and suddenly there is nothing to talk about except some youth pastor from Chicago.

MINISTERS: ALL THE MEMBERS OF THE CONGREGATION

THE WEARING OF STOLES

Much has been made of the wearing of stoles of late, particularly rainbow stoles worn as a statement concerning the ordination of gays and lesbians. There has been criticism and support. In this highly charged climate it might be helpful to consider the wearing of stoles and by whom over the history of the Church. Most of this information comes from a delightful site called “nerd country.”   If the information is wrong please blame the folks at nerd country or me if I have failed to interpret them correctly.

“The word stole derives via the Latin” as a word borrowed (as often happened) stola, from the “Greek . In its ancient form, it is the language of classical ancient Greek literature and the New Testament of στολη (stolē), "garment", originally "array" or "equipment".  (The word is used eight times in the New Testament in each case referring to "a loose outer garment for men extending to the feet, worn by kings, priests, and persons of rank.")

The stole was originally a kind of shawl that covered the shoulders and fell down in front of the body; on women they were often very large indeed. (My note: the stola therefore was originally a garment for women. What might that say about “clergy?”). After being adopted by the Church of Rome about the seventh century (the stole having also been adopted in other locals prior to this), the stole became gradually narrower and so richly ornamented that it developed into a mark of dignity. Nowadays, the stole is usually wider and can be made from a wide variety of material.

There are many theories as to the "ancestry" of the stole. Some say it came from the tallit.  A tallit (taleth or talet in Sephardic Hebrew and Ladino) (tallis in Ashkenazic Hebrew and Yiddish) is a Jewish prayer shawl worn in the synagogue on Shabbat and holidays, and while reciting morning prayers (Shacharit), as well as afternoon (Mincha) and evening prayers (Ma'ariv) by many Sephardic Jews. The tallit has special meaning because it is very similar to the present usage (as in the minister puts it on when he or she leads in prayer) but this theory is no longer regarded much today. More popular is the theory that the stole originated from a kind of liturgical napkin called an orarium. In fact, in many places the stole is called the orarium. Therefore it is linked to the napkin used by Jesus of Nazareth in washing the feet of his disciples, and is a fitting symbol of the yoke of Christ, the yoke of service.  (the word stola is not used in the John 13 to describe the cloth Jesus used to wash the feet of the disciples.)

The most likely origin for the stole, however, is to be connected with the scarf of office among Imperial officials in the Roman Empire. As members of the clergy became members of the Roman administration, they were granted certain honors, one specifically being a designator of rank within the imperial (and ecclesiastical) hierarchy. The various configurations of the stole grew out of this usage. The original intent then was to designate a person as belonging to a particular organization and to denote their rank within their group, a function which the stole continues to perform today. Thus, unlike other liturgical garments which were originally worn by every cleric or layman, the stole was a garment which was specifically restricted to particular classes of people based on occupation.

(The above is mostly from the nerd community with some editing. The following is my comment.)

In other words the stole is NOT a symbol of humility or a follower of Christ. It is a symbol of one’s place and office in the Roman Empire and the Church. It is a symbol of separation between laity and clergy. One could argue then as is often done, that a stole should be worn only by ordained clergy. (Deacons in the Roman Catholic and Anglican traditions wear a stole in a different configuration, over the left shoulder, across the chest and the back to the right side of the body.)

In the early Church, however, those who read, preached and celebrated the sacraments wore everyday clothes like everyone else attending worship. It was only as Christianity became the religion of the Roman Empire that clergy began to wear stoles as a sign of office.

One could argue therefore that the wearing of stoles by clergy is a statement about the Church, that there is not true equality in the Church between those called to serve as Ministers of Word and Sacrament and the so called “laity.” If we Presbyterians truly believe that the laos, the people includes all Christians pastors either should not wear stoles or all Christians should.

As to the wearing of stoles as a political or religious statement by one or more groups in the Church the stole should not be worn by as a symbol of difference but rather as a symbol of unity. That, I believe is one of the intended messages of those who wear rainbow colored stoles at meetings when the issue of ordination of gays and lesbians is to be voted upon. All should wear the stole or none unless of course we believe that Ministers of Word and Sacrament are somehow more important or to be elevated above other members of the Church. I hope we are past the Roman days at least in the Presbyterian Church. If not I will gladly stop wearing a stole.
Posted by Pastor Bob at 11:57 PM 24 comments: 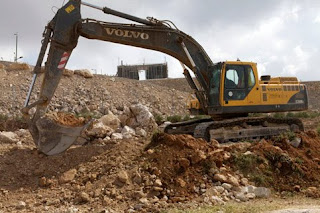 So in two years when we talk about divestment in Caterpillar again shouldn’t we also talk about Volvo?  And about Christian Church buildings that are destroyed in Egypt?  Blown up in Iraq?  Christians being killed and threatened with death in Nigeria or Pakistan?  Should we divest in companies that sell bulldozers to Egypt?  Or don’t we care about what those other countries do?  And if we think only Israel is to be condemned what does that say about us Presbyterians?
Posted by Pastor Bob at 1:13 AM 2 comments:

I CAN'T SLEEP THEREFORE: GOOD THINGS ABOUT THE BLOGOSPHERE AND THE INTERNET

The blogosphere, when used incorrectly, is a relatively anonymous place to say nasty things about the ideas and character of others. At its best the blogosphere confronts us with ideas that are different from our's and occasionally leads us to blogs we never would have found without the references of others.

Consider this: John Shuck and I aren't exactly in the same theological camp.  Actually that's like saying that the solar system is part of the Pinwheel Galaxy (go ahead, look it up!).  I think John would agree that we have rather different theological ideas but somehow we still manage to get along.  I won't try to define John as I'm not sure even John can define John!

BUT it was on John's blog that I first saw a reference to Dr. April DeConnick, expert in early Christian literature, both that which later became orthodox and that which did not become orthodox and some stuff that was always really way out there.  Dr. DeConnick persuaded me to buy a couple of her books, not by recommendation but rather by her writings on her blog.  So now I know more about the Gospel of Judas (and the disagreements about it) than I ever expected to know.  I read regular posts about this and that Gnostic group and pleas that all scholars who actually want to do scholarship on early Christian literature must also learn Coptic.  (And I thought I was uneducated because I never learned Latin and I've let my Hebrew slip!)  She continues to plan and schedule conferences that I am unable to attend (she is in Houston TX and I am in Philadelphia PA) and recommend papers that will be read at the meetings of the Society for Biblical Literature which I can also not attend.  How could I ever explain to the Session that hearing papers on obscure Gnostic texts will somehow help the congregation?

Yesterday Dr. DeConnick recommended a new blog by a colleague of her's from England Larry Hurtado who's specialty is Textual Criticism and other things pertaining to it.  Someone named David commented on one of Dr. Hurtado's blog posts which directed me to an old book.  Which brings us to the part where I talk about the internet.

One of the nicest things about the internet is that you can find just about anything information you want if you just put the right words together in a web search.  That, BTW is how I found the Pinwheel Galaxy.  I just googled galaxy names and found a list.  On a more serious note David mentioned a book that is an absolute must have for those who are interested in how to do Textual Criticism, The New Testament in the Original Greek: Introduction and Appendix by Hort and Westcott, the folks who really turned Textual Criticism into a science (and who list every possible text available to them in their texual notes in their Greek New Testament).  Fortunately their book is old enough to be in the public domain and I am in the process of downloading it right now (it's over 29 mbs). I plan to read this baby on my vacation this summer (which confuses my children and amuses my wife).  It seems that libraries are scanning their older texts and placing them online in PDF format.  If one is a student at a registered school one already has free access to all kinds of papers available online.  Now the books are becoming available too.  BTW you can find Mark Twain free online too.  So don't neglect that celebrated jumping frog!

Who would have thought that when Al Gore invented the internet :) that it would be a scholarly resource for theologians and Biblical scholars and people like me who think reading such is fun!  And for free too!  As a Scottish immigrant who is a member of Tully Memorial (she's 92 and going strong) says, "There's no point in being Scottish unless you work at it!"  Free literature is where it's at!

6 more mbs to go!  Have fun out there on the internet ya'll.  And be careful out there!

THE DONATISTS, LUTHER, CALVIN AND THE PRESBYTERIAN CHURCH (USA)

When you die there are certain things your loved ones (or your executor or executrix) have to do.  They need more death certificates than most people imagine because all these government agencies have to be told.  If you own a house they not only have to sell it but have to clean it out first.

All of which set me to wondering about the electronic, that is net stuff that you leave behind.  I have a bunch of email boxes.  Will my loved ones remember to delete them or will they go on forever?  And I average around 50 pieces of spam everyday at one email.  Even if my loved ones delete my email box will spam be sent to me forever?

I just realized that the internet is the gift that keeps on giving . . . maybe into eternity.  Or when Jesus returns will all spam be sent to hell and good emails be rewarded?

Life was much simpler when there were radios and TVs for entertainment and the TV only got three channels.
Posted by Pastor Bob at 5:35 PM No comments: