Presbyterians Seeking Their Way into the Kingdom: a Parody

"When the Son of Man comes in his glory, and all the angels with him, he will sit on his throne in heavenly glory. All the Presbyterians will be gathered before him, and he will separate them one from another as a shepherd separates the sheep from the goats. He will put the sheep on his right and the goats on his left.
"Then the King will say to those on his right, 'Come, you who are blessed by my Father; take your inheritance, the kingdom prepared for you since the creation of the world. For I was hungry and you gave me something to eat, I was thirsty and you gave me something to drink, I was a stranger and you invited me in, I needed clothes and you clothed me, I was sick and you looked after me, I was in prison and you came to visit me.'
"Then the righteous will answer him, 'Wow Jesus, we figured we would be in trouble for refusing to serve on all those committees!  People complained about us at presbytery all the time!  We never got to go to General Assembly because we didn't show up at presbytery meetings.  Besides, when did we see you hungry and feed you, or thirsty and give you something to drink? When did we see you a stranger and invite you in, or needing clothes and clothe you? When did we see you sick or in prison and go to visit you?'
"The King will reply, 'I tell you the truth, whatever you did for one of the least of these brothers of mine, you did for me.'
"Then he will say to those on his left, 'Depart from me, you who are cursed, into the eternal fire prepared for the devil and his angels. For I was hungry and you gave me nothing to eat, I was thirsty and you gave me nothing to drink, I was a stranger and you did not invite me in, I needed clothes and you did not clothe me, I was sick and in prison and you did not look after me.'
"They will reply, "But Jesus we preached every Sunday!  We served on many presbytery, synod and general assembly committees, and task forces and commissions!  We attended presbytery meetings faithfully and even paid to go the General Assembly meetings our of our own pockets!  Well actually our congregations paid.  But really all this time we did your work!  What's with the new rules?
"He will reply, 'Sorry boys and girls, I never particularly cared for meetings. And to be honest your sermons just make people feel self righteous.  I care about the hungry, the thirsty, the stranger, the naked, the sick and those in prison.  Committee meetings have never been on my list.  When I was on earth I avoided them as much as possible as most of them are a waste of time and keep you from doing the really important things.
"Then the committee members will go away to eternal punishment, but the righteous to eternal life." (My apologies to those who translated the NIV)
Posted by Pastor Bob at 6:09 PM 3 comments:

Viagra, a few more inches and a healthy marriage

This post is gross but then life can be gross.

I always check the spam email in case there might be something in there worth reading in the spam folder like a magazine from my seminary.  And I still get those letters from around the world offering millions if I would just pay the shipping.  ButI mainly get adverts to help my penis.  There are a lot of ads that talk about wanting to sell me Viagra.  Interesting conclusion from the drug company.  It knows I'm male and in my late 50s so I must need Viagra. My wife gets it too.  She needs Viagra?

Then there is a lot of spam advertising that if I use their product my penis will grow 4 inches in a month.  Gotta wonder how I could walk around in pants with that thing in my briefs.

But the main message seems to be that sex is really all there is to life.  Personally I've discovered that even when I was much younger sex was not the key to a relationship.  Not that it isn't a lot of fun.  But you can't do it all the time.  Married life is more about the joy of communicating and having someone who will listen to me even when I babble on about things no one cares about but me.  My wife always listens when I come home all excited about a new Greek word I learned and the context of the word.  When I ask her if she actually cares she responds "No, but I care about you." Which is a blessing.

Not that I don't enjoy sex but our culture seems to be obsessed with it.  Sex or beautiful near naked women are used to sell everything.  There used to be a billboard with a large beautiful blond in a very skimpy bikini and a very small can of beer down in the corner.  Also there were and are commercials that have a mostly naked woman draped across the front of a hot car.  The assumption about the beer commercial seems to be that if I get sloppy drunk a beautiful woman in a bikini will want me.  As to the car, one time after one of those commercials with the woman on the car I had the audacity (and stupidity) to say to my wife, "Hey, my car came with a missing part!"  When asked what that might be I I pointed to the beautiful blond.  I don't remember anything after that.  I was probably unconscious.

When it comes to land I am a traditional Calvinist. That is when speaking theologically I don’t believe that God has established one place as more important or more holy than any other. Traditional Calvinists believe all land, space, stars are equally holy as all is created to give glory to God and to enjoy God to whatever extent soil, rock, stars and the space in between can enjoy God. I refrain from saying what soil rock, stars and space can feel as I am none of the above and can only comment from a human point of view. God may have called the descendants of Jacob to a particular land which is, for them more holy and the temple mount most holy of all. God may also have called Muslims to have holy places as well, Mecca with pride of place 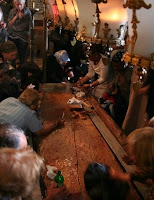 As an aside I would observe at this particular moment that much of the Gulf of Mexico, to the extent it can enjoy God and be holy must be weeping, if possible, because of human destruction and sin.

But that is not the point of this blog. When leaving for Israel two and a half years ago I stated that Christians do not have places that are more holy than others. As Jesus said to the Samaritan woman:

"Woman, believe me, the hour is coming when you will worship the Father neither on this mountain nor in Jerusalem. You worship what you do not know; we worship what we know, for salvation is from the Jews. But the hour is coming, and is now here, when the true worshipers will worship the Father in spirit and truth, for the Father seeks such as these to worship him. God is spirit, and those who worship him must worship in spirit and truth."

Thus according to Jesus neither Mount Gerizim where the Samaritans worship nor Jerusalem where Jews had their temple were somehow more holy anymore than any other place.

Having said all of that, my experience does not coincide with my theology. When in Israel I discovered two places in which I “felt” that God was somehow more present: the Church of the Holy Sepulcher and the Western Wall (also called the Kotel).

My Celtic ancestors (alright, I have lots of ancestors from other places and other ethnic groups) call places where God seems to be more present “thin places. My theology says they don’t exist, they can’t exist. But my experience is different.

I’m not entirely sure how to describe my experience. Certainly part of it was feelings. Somehow when I touched the Western Wall I had a feeling of peace and a feeling of touching eternity. And in the Church of the Holy Sepulcher I had the same sense. In that spot I felt like I was at the center of Christianity. Somehow the Triune God was present in a way that God is not present in other places.

I have the same sense of presence, what I might call the eternal now when I take communion.

So I wonder if I was to go to Ireland or Scotland (particularly to Iona) would I have the same sense? Or would the Dome of the Rock produce such feelings? We didn’t get a chance to go there when I was in Israel. Besides non Muslims can get kicked off the mount, curiously by Israeli police, for praying on Mount Moriah.

Theology is, for the most part, thinking. It is an attempt to describe the God the Bible speaks about and what God has done, not only in the Biblical record but also since then. Is there a place for feelings alongside theology? Are there really thin places? My Calvinist head says no. My heart says yes.

Someday I want to go back to the Western Wall and the Church of the Holy Sepulcher and examine my feelings theologically. Or examine my theology in relation to my feelings.

As for now I have declared a truce between theology and feeling. I simply remember.
Posted by Pastor Bob at 5:08 AM 2 comments:

Death at Sea. Maybe a Chance for Peace?

I am in no way an expert in military affairs or in maritime law.  But I have read various press reports and watched videos both from the Israeli Defense Force and Al Jazeera.  Here are the two videos.  Let me know what you see.  But it has to be what you see not what you believe.